Japanese game developer CYBIRD Co., Ltd has released the English version of Liber Entertainment Inc.’s popular Ikemen Actor Training Game “A3!” as of today, Wednesday October 23, 2019. (*Note that this release does not include the regions of Japan, Hong Kong, Taiwan, Macau and China.)

Though Japanese entertainment has met with great success overseas, the female user-targeted game market in North America and other English-speaking regions is still much smaller in comparison to other regions in Asia. In order to increase user awareness of this market, CYBIRD has been actively expanding their reach through the release of the English version of their popular Ikemen Series otome games which have downloaded by over 25 million users internationally, as well as their active participation in various anime and game-related events all over the globe.
Fellow Aeria Inc. subsidiary Liber Entertainment Inc. plans to make use of CYBIRD’s knowledge of the international market to ensure a quality English release of “A3!”, further increasing fans of the hit game while showcasing the appeal of female-targeted games to a wider audience. In addition, there will be no changes to the voice cast or music for this release.

CYBIRD will be featuring “A3!” at their booth at C3 AFA Singapore 2019 (C3 Anime Festival Asia Singapore). The event originated in Singapore but has since spread to other parts of Southeast Asia. It is said to be the largest anime event outside of Japan, and CYBIRD will be participating for the 3rd year in a row. More details will be announced in a later press release.
◇Event Dates：November 29, 2019 – December 1, 2019
◇Event Website：https://animefestival.asia/singapore19/

The “A3!” official English twitter held a number of campaigns before the games release, ranging from a preliminary character popularity poll where users get an SR card of the top character, to a follow campaign where all users could win in-game items such as Gems and training items. 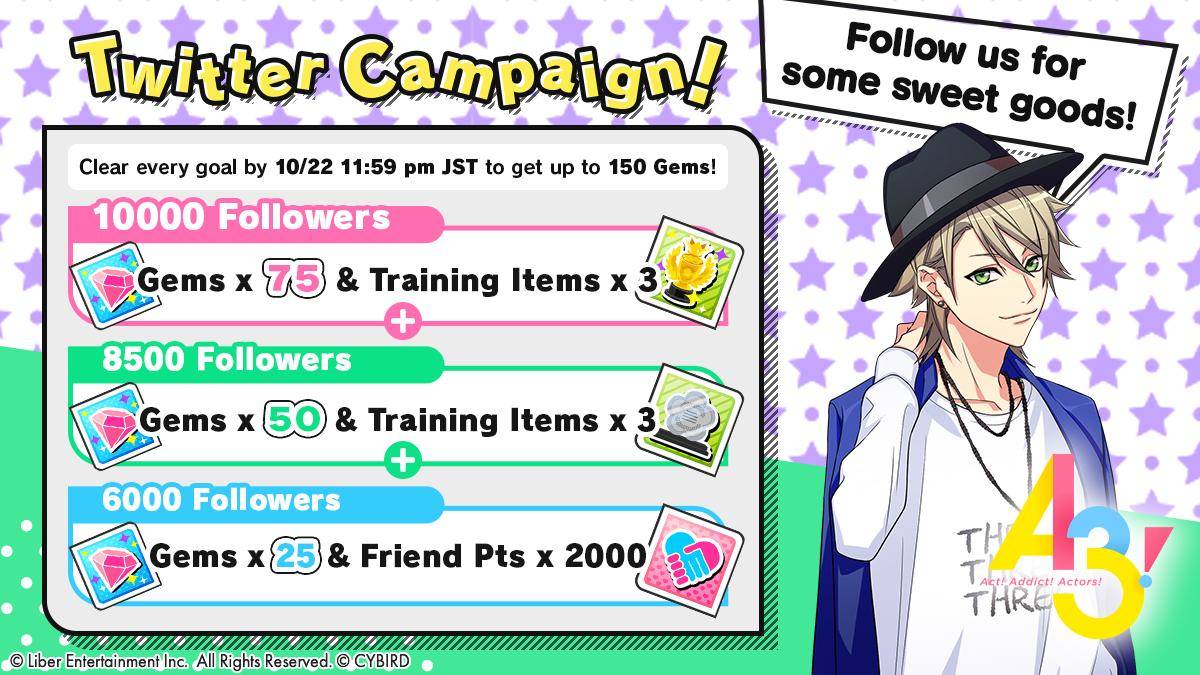 First released for iOS and Android on January 27, 2017, "A3!" has since surpassed 6.5 million downloads. An anime adaptation has also been announced and will be broadcast in January 2020. In "A3!", players take on the role of a theater company director who has to assemble a cast of 20 attractive actors to save a theater on the verge of shutting down. All of the main story dialogue is fully voiced with an amazing voice actor cast. The actors are divided into four troupes: Spring, Summer, Fall and Winter, and the goal of the player is to train these budding actors to make them "bloom" on stage.