Without time to bask in the afterglow of the victory at S1, Trickstar members are called to the school council room. The president of the school council Eichi Tenshoin informs that they must break up.  We look back at the highlights of the shocking Ep. 7! 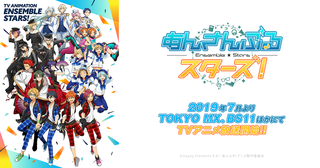 Anzu (Played by Maaya Sakamoto) is surrounded by students as the goddess that led Trickstar to victory. Souma Kanzaki (Keisuke Kaminaga), her classmate and one of the members of Akatsuki, helps her with releasing.

At the same time, Koga Ogami (Yuki Ono), one of the members of UNDEAD has a similar letter outside of the classroom. He gets enraged ignoring Adonis Otogari (Wataru Hatano) advising him to ask Rei Sakuma (Toshiki Masuda) a judgement.
次のページへ
30 Posts
ツイート
テストを受ける