My Master’s Mesmerized by Mystery

The Event Story follows Winter Troupe’s preparation for their 2nd play as Lead Actor Homare and 2nd Lead Actor Hisoka work together to put on a successful performance.
This is Winter Troupe’s first mystery-genre performance, where Taisho-era butler Sagishima (played by Homare), must watch over his young charge, Shiki (played by Hisoka) as Shiki tries to find the culprit of a murder of a young woman.
Watch as Homare looks back on his relationship with his grandmother and the trials of his past, figuring out how to channel his past experiences into his butler role, while Hisoka tries his best to stay awake in his first major role, with the promise of six months-worth of marshmallows waiting for him if he succeeds! 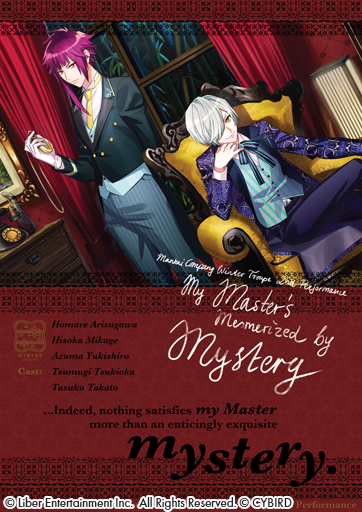 “So even you have more intelligence than a dog.”

My Master’s Mesmerized by Mystery will be a Troupe Event, where players do Event Practice to trigger Event Shows – succeeding at Event Shows nets players item drops as well as Event Pts, which determine Event Ranks.
Players who meet Event Pt goals or reach high Event Ranks are eligible for special prizes including consumable in-game items as well as SR and SSR Actor cards!
The following cards are given to players for Ranking in or for reaching Event Pt goals (details are available in-game in the Event Prize list on the Event Page):
SSR [Yes, Sir!] Homare
SR [Young Playboy] Tsumugi

In addition, the accompanying Limited Time Tryouts for My Master’s Mesmerized by Mystery, the Knox’s Ten Commandments Tryouts, will be starting from 3/12 (Pacific Time)!

For these Tryouts, players can use Gems to get Taisho era themed Actor cards that offer bonuses during the Event! These Actors include:
SSR [A Witness in Passing] Hisoka
SR [The Other Me in the Mirror] Azuma
R [My Master’s Mesmerized by Mystery] Tasuku

In addition, all cards obtained as Event Pt rewards and during the Tryouts come with special Backstage stories that can’t be found anywhere else!

But wait, there’s more!
By achieving 100% completion for the My Master’s Mesmerized by Mystery Event Practice and completing an Event Show, players will also be able to unlock its theme song, “Es no Yuutsu” for their in-game jukebox!

If you haven’t already, be sure to download the A3! app and try your hand at the My Master’s Mesmerized by Mystery Event! You can also follow A3! on social media for more updates!